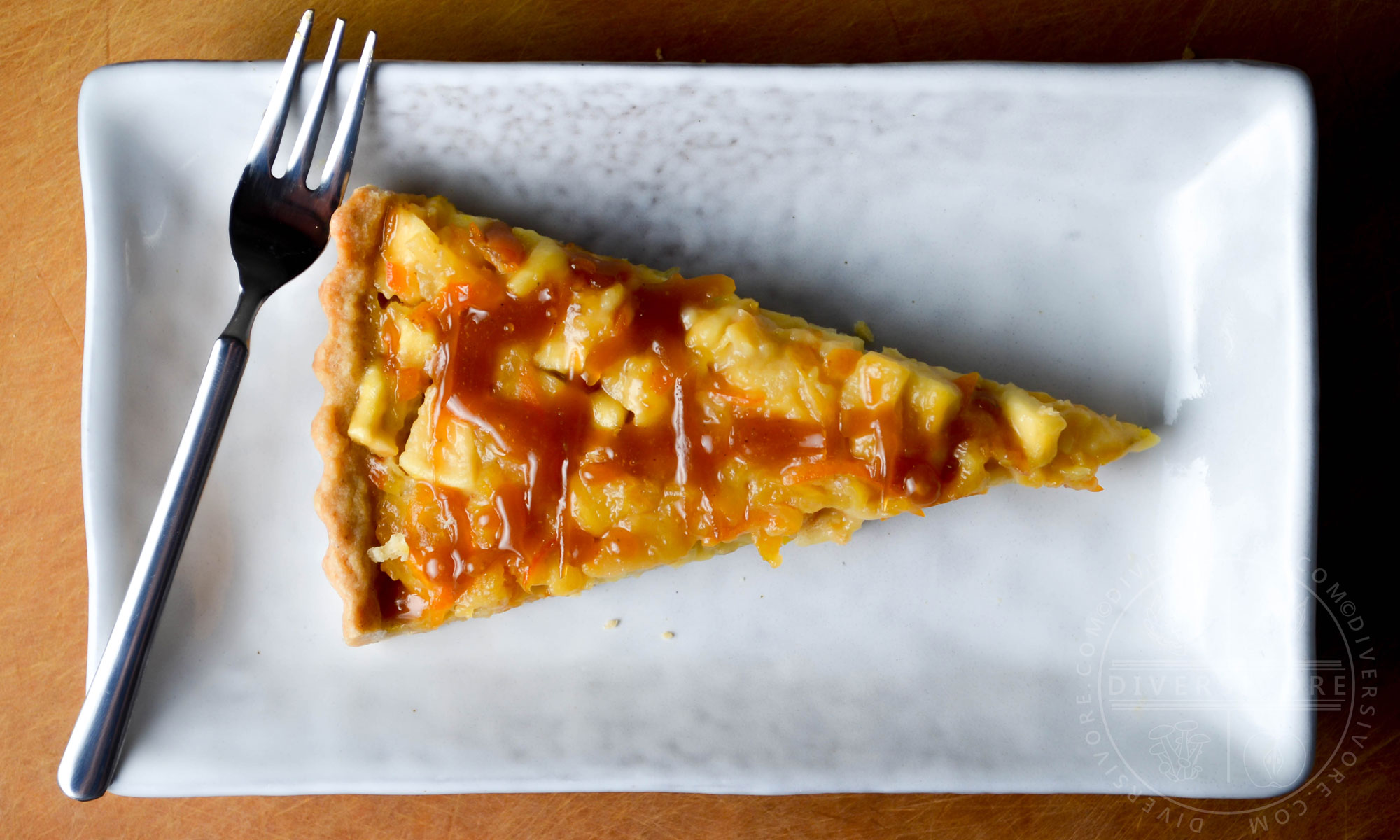 I love to improvise when I cook. When I bake? Not so much.

I enjoy baking, but the precision of it has always put me off a little. I like cooking because I don't have to measure, and I can decide to add or remove an ingredient while I work. But baking requires a lot more planning. So when it comes to inventing a baking recipe I get a little unsure of myself. To compound my worries, this tart doesn't really fit into any conventional molds - it's not a traditional apple pie, it doesn't use a flaky/risen crust, and it doesn't use a citrus curd or a custard. But I swallowed my fears and dove right in. And wow, am I glad I did.

This tart is just... I mean, it's a little bit banal to say that it's good, but it's so good.  The crust has the buttery feel of a very thin shortbread, and it plays perfectly against the filling.  The apples have a bit of bite to them (I personally don't like mushy apple pie), and the kumquats are bright, sour, and bitter all at once.  The caramel adds another layer of flavour and a great little bit of crunch that really brings things together from a textural standpoint.  And the Scotch whiskey? Oh boy.  Or... ach, laddie.  It's difficult to describe just what the Scotch does that's so spectacular, but I'm going to go on the record here and say that whiskey-and-citrus is a match made in heaven.  Did I mention that it's in the caramel and the filling? If you're going to change anything, you could try a different whiskey (bourbon would work), but for the love of pie, don't leave it out altogether.

Ironically, writing a food blog and developing recipes has forced me to measure and plan more.  You can't just pour a little extra something into your dish... your readers need to know how much.  You have to remember and write down every little step along the way (even if you think something should go without saying, like 'remove from the oven' - surely people know to do this with cooked food?).  You can't just sit down and eat - you have to figure out how best to capture the dish photographically, and whether or not you need any photos of the prep.  So maybe I'll do a little more baking - I'm half-way there already. This is a relatively time-intensive recipe, but not a difficult one. Plan ahead and you'll find that it actually comes together quite easily.

The crust can be substituted for another short crust recipe if you prefer, but I don't recommend using a flaky pie dough. You want something firm to stand up to the relatively soft tart filling. Make sure that you get the crust nice and thin. If you don't have a large tart tin like the one called for in the recipe, you can use a very large pie dish. If you only have smaller dishes, I would recommend either a) baking two pies, or b) scaling down the recipe, as it won't work as well if the filling is very thick. The whole tart should only be about 1.5 cm (3/4 inch) thick.

Macerating the fruit, sugar, and whiskey helps blend and mellow the flavours while also serving to soften the kumquats. I recommend leaving the mixture in the fridge overnight and breaking this recipe up over two days.

I like the kumquat cut into tiny strips and the apple left as a small dice, but you can vary this depending on your personal tastes.

If this is your first time making caramel, this is a pretty easy one to work with. The most important thing to remember is that you need to work fast - the difference between caramel and burnt sugar is only a matter of seconds. Once the cooked sugar is a nice golden color, add the other ingredients and watch as the whole thing suddenly looks like it's about to explode. That's the fun part about making caramel. (Don't worry, it won't explode).

The final product will only be pliable for a little while, so make sure to pour it while it's warm.  It will cool into a solid, candy-like caramel, and not a soft chewy one. Nutritional info is given for a single slice representing 1/10th of the total tart.

GOOD NEWS:
For a dessert, this is actually pretty good.  It's rich and complex tasting, so a moderately sized piece (1/10th of the tart) is actually just the right amount, and that doesn't deliver too many calories (again, for a dessert).
BAD NEWS:
A little high in saturated fat, which is pretty much unavoidable with all the butter. This recipe is ideal for a large, thin tart, but it could be adapted to make many small tarts or even a more traditional (i.e. deeper) pie. If you do decide to go this way, note that you should take care not to over-fill the pie, as it won't set as well and may be a little too jammy. You can also modify this to use your favorite pie or tart crust.