Alright, confession time. I did NOT like mushrooms as a child. Or as a teenager. Or... well, really through most of my twenties. I was that kid who would pick out every last mushroom, scraping them disdainfully to the edge of my plate in order to avoid having them contaminate the rest of my meal. I know I'm not alone here; few things seem to evoke as many mixed emotions as mushrooms (perhaps cilantro, but there's a genetic basis for that one). You're probably thinking that this will be the point where I tell you how wrong I was, and that I didn't really give mushrooms a fair shot, but I'm not going to do that. Because the thing is, I'm still not really big on button mushrooms (especially canned ones... I just... I don't want to talk about it). But what I didn't realize until I was well into adulthood was that mushrooms are SO much more than slivered little brownish white buttons. My eyes were first opened by slender white enoki mushrooms. I couldn't believe it - I mean, here was a tasty mushroom, with a crunchy texture somewhere between a bean sprout and a chewy noodle. It was incredible! And truth be told, I think 95% of my mushroom aversion was really textural to begin with. With that discovery under my belt, I decided to widen my search, and was overjoyed to discover shimeji mushrooms. With a spectacular rich flavour and a firm textural bite, they were everything I wanted a mushroom to be. 8-year-old me would be flabbergasted watching me eat these (that is, if he wasn't so preoccupied trying to find microscopic mushroom slivers in my mom's otherwise excellent spaghetti sauce).

Moving past my mycological musings and misgivings, let's talk about what's going on here. I suppose you could consider this a 'fusion' dish, but possibly not in the sense you might expect; the sauce leans heavily on Chinese flavours, but the vegetables and noodles are actually Japanese. Shimeji mushrooms grow widely in East Asia (and parts of Europe) but are most popular in Japanese cooking. As you may have guessed, the word shimeji is Japanese - in English they're sometimes called beech mushrooms, though the term isn't used much in the culinary world. These are actually buna-shimeji mushrooms, a term used to differentiate them from hon-shimeji (lit. 'true shimeji'), which are a different species altogether (Lyophylum shimeji). Annoyingly and confusingly, the term 'hon-shimeji' is increasingly used in English for buna-shimeji, I'm guessing because it makes them sound fancier. And while we're talking about confusing names, let's talk about broccolini. Broccolini was actually first bred in the 1990s in Japan, where it remains quite popular, but it's NOT simply skinny broccoli. Broccolini is a true East-meets-West mixture: it's a hybrid of broccoli and gai lan (Chinese broccoli), two members of the same wildly variable species (Brassica oleracea). If you're suddenly picturing complicated genetically modified shenanigans, don't; broccolini is simply the result of old-fashioned cross-breeding. Put two plants in a room with some Marvin Gaye, and let nature (or a group of agricultural scientists looking for ideal offspring) take its course.

This is an easy-peasy stir-fry, and a great place to start if you're relatively new to the process. It's also pretty easy to adapt (see the vegetarian options below, for example), and one that doesn't require too many crazy ingredients. As I mentioned earlier, it's got a lot of Chinese character going for it, and this is primarily thanks to the five-spice powder, Sichuan peppercorns, and thick soy sauce. As with so many stir-fries, this meal comes together very quickly. The key here, and for stir-fries in general, is to be organized, and to have a really hot wok. If you're new to stir-frying, or you've had trouble getting things to work well for you in the past, check out Part 1 of my 3-Part series on preparing Chinese greens. Even though this uses more than just greens, the basic rules are the same. While I encourage you to go read the post, I'll sum up one of the most overlooked elements here: don't overcrowd the wok. Unless you have some sort of terrifying blast-furnace for a stovetop, you probably can't muster enough heat to stir-fry a lot of food and maintain a high temperature. Add too much to the wok and the temperature drops, meaning that your food basically simmers and steams instead of stir-frying. This is particularly noticeable with veggies, as they become soft and watery. As with most stir-fries, this is easily scaled up or down, making it perfect for one person or 10. That being said, if you are looking to prepare this for more people, I highly recommend working in small batches in order to avoid crowding the wok. Try cooking the chicken, then the mushrooms, then the veggies (split the sauce between the mushrooms and the veggies). This will help you avoid the floppy steamed veggies problem, while giving you a better chance of imparting the wonderful smoky-browned wok hei flavour that you want in a dish like this.

If you're not a fan of or are unable to get your hands on five-spice powder or Sichuan peppercorns, this can be made without them for a paired down, simple noodle dish. That being said, the subtle and utterly unique flavours imparted by those two ingredients help to elevate this above the level of a simple sweet-and-salty noodle dish, so I really would recommend leaving them in place. If you happen to have easier access to Japanese ingredients, you can substitute sansho pepper for Sichuan peppercorns - the two are closely related and have a lot in common.

This whole dish is easily made vegetarian by replacing the chicken with firm tofu (or doukan), or even nuts. Cashews would work wonderfully.

If you don't have thick soy sauce, use a slightly smaller quantity of regular soy sauce and some corn-starch mixed with water to achieve a thickening effect. The taste won't be quite the same, but should be darned tasty nonetheless. 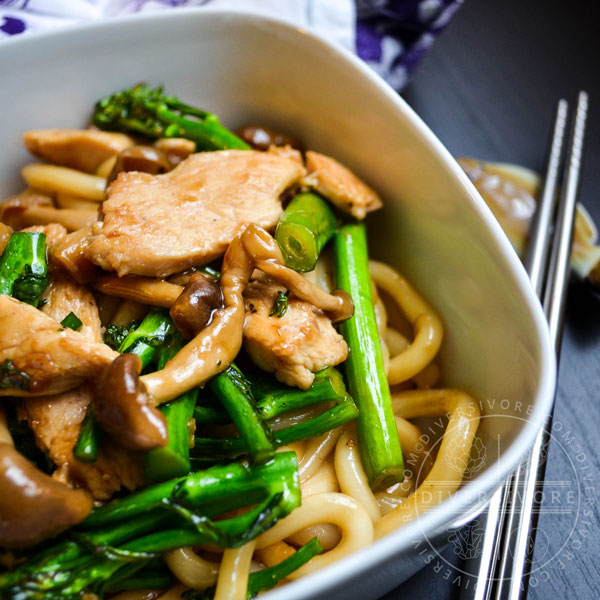 Nutritional information is given for a single serving (1/4 total recipe) including noodles. Note that some numbers may vary depending on the type of noodles you use.

GOOD NEWS:
This quick and delicious dish is high in protein, low in fat, vitamin rich, and relatively low in calories (for a noodle dish anyway).  If you can curb the sodium (see below), this is an extremely healthy weeknight dinner idea.
BAD NEWS:
This is so high in sodium, I thought I'd made a mistake in the calculations.  Turns out I hadn't, but I learned something new -- most pre-made udon noodles have shockingly high salt levels.  Add the sodium content of the soy sauce and this is a salt double-whammy. But don't worry - you can change it up (see below).
CUT THE SALT:
If you are trying to reduce your sodium intake, you can still work with this recipe. Frozen udon tends to have less salt than the shelf-stable vac-packed stuff, so start there. You can also search out some of the dry, no-salt-added varieties of udon (or another low-sodium Asian noodle).  You'll have to cook them before tossing them into the wok, but they'll taste great too. If you're looking to prepare this for more people, I highly recommend working in small batches in order to avoid crowding the wok.  Try cooking the chicken, then the mushrooms, then the veggies (split the sauce between the mushrooms and the veggies).  If not, you may end up with floppy steamed veggies instead of stir fried ones. If you don't have thick soy sauce, use a thin dark soy sauce and some corn-starch mixed with water to achieve a thickening effect.  The taste won't be quite the same, but should be darned tasty nonetheless. 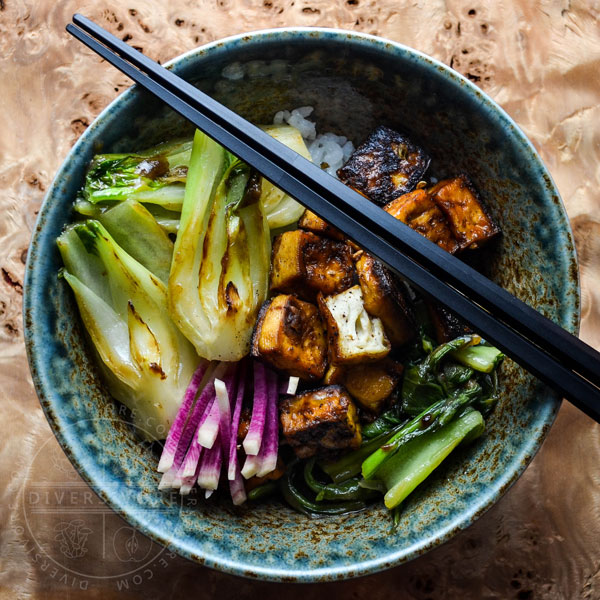