With a Black Bean & Citrus Sauce

I've always had a fondness for scientific names. I realize that many people don't exactly feel the same way I do - after all, it is easier to remember the word 'shrimp' than it is to remember Litopenaeus vannamei. Plus, it is admittedly more poetic to herald the coming of spring by pointing out the arrival of robins, rather than the incoming Turdus migratorius. So why do I like scientific names? Well for one thing, sometimes they just sound awesome. Take the humble soybean; do you know what its scientific name is? Glycine max. How awesome is that? It's like a vegetable superhero.  On top of that, its kind of cool (well, cool to me) to find out that we occasionally use scientific names without even realizing it; Asparagus is, officially, Asparagus officinalis, which kind of sounds like it should be its twitter handle.  But what I love most about a scientific name is the precision and specificity it carries.  Each two-part name, composed of a genus (always capitalized) and a specific epithet (never capitalized), is used to formally describe one species and one species alone.  Now, I won't get into the blurry lines that sometimes exist between species (that's basically 90% of my graduate work, and trust me when I say that it gets confusing), but suffice it to say that a scientific name tells you a lot more than a common name.

Diversivore is a science and education blog, but it is first and foremost about food - so what does all this have to do with food?  Language tends to be a pretty flexible thing, and the language surrounding food is no exception.  Take the word 'pepper,' which can mean black, green, or white pepper (Piper nigrum in its various states), pink pepper (Schinus molle),  Sichuan pepper (Zanthoxylum simulans),  alligator pepper (Aframomum melegueta), or any of the various hot and/or sweet peppers (Capsicum anuum in its many guises).  On the opposite side of that coin, we have situations where a single food is given countless names within a single language.  Eggplant (Solanum melongena) is a great example; in the English-speaking world alone it is also known as aubergine, melongene, garden egg, guinea squash, brinjal, and (my personal favourite) brown jolly.  I could go for a plate of brown jolly parmigiana right now.

Context, explanation, culture, and descriptive language generally make it clear what exactly is being discussed when a word like 'pepper' is used, and good ol' Google can usually help us figure out what the heck a British recipe means when it calls for capsicums and aubergines, but sometimes things do get genuinely confusing.  So it is with 'black beans.'  This recipe prominently features the powerful flavour of the fermented black soybean, known in Mandarin Chinese as douchi (pronounced DOH-chi, with the i sounding like the middle of the word 'shirt').  These are commonly called black beans, but they have absolutely NOTHING to do with the black beans you'll find in a burrito. They taste completely different because, well, they are completely different.  The black beans (aka black turtle beans) used in North/Central/South American and cooking are a variety of the common bean (Phaseolus vulgaris).  A similar bean called the black gram (Vigna mungo) is used in Indian food, and is sometimes replaced with the black turtle bean.  But neither bean has anything to do with douchi.  The Chinese black bean, which features prominently in black bean sauce and the dishes that revolve around it, is a salted and fermented black soybean (Glycine max).  If you've tasted these beans, you'll immediately understand the importance of avoiding confusion.  A Chinese dish made with black turtle beans would bare absolutely no resemblance to one made with douchi, while a burrito made with douchi would be pretty terrifyingly intense.

Bean confusion wasn't the only reason I decided to write about this topic today.  This entire dish is a mishmash of ingredients with variable and confusing names.  The snow peas, which are commonly confused with sugar/snap peas, are called mangetout in much of the English-speaking world. The dried citrus is frequently called orange peel, but is generally actually mandarin. But this whole issue of nomenclature takes a fairly serious turn when we look at the seafood.  I can't think of anything else we eat that's been so confusingly muddied up with inaccurate, insufficient, and even misleading names.  Consider shrimp - for many of us shrimp is just shrimp - a single food entity that warrants little further differentiation.  Nothing could be further from the truth.

Now before I get to far into this, let me be clear that I'm not just worried about semantics here; what we call our seafood really matters.  A recipe like this one might simply call for shrimp, leaving it up to the reader to decide on size and variety, but shrimp fishing is a gigantic industry ($50 billion per year globally) and not all harvesting is achieved responsibly.  The spot prawn (Pandalus platyceros) industry here in British Columbia is a paragon of sustainability, but its economic impact is a blip compared to the farmed shrimp industry, which focuses primarily on the Pacific white/whiteleg shrimp (Litopenaeus vannamei), giant tiger prawn (Penaeus monodon) and a handful of less significant species.  Spot prawns are delicious, but expensive, especially for a meal like this that doesn't really revolve around the shrimp alone. So should you buy farmed shrimp?  That depends very much on the shrimp - some operations are sustainable and ecologically sound while others are horribly destructive.  To make matters worse, one species might be raised responsibly in one place but not in another.  The Vancouver Aquarium's Oceanwise program lists information for 67 different species and/or harvesting methods (at last count) for consumers looking to make environmentally informed decisions. I'm only barely scratching the surface of this issue, but it rapidly becomes clear that a shrimp is not just a shrimp.

Of course I'm not suggesting that we start writing out recipes with scientific names, but I hope you'll believe me when I say that a name can be incredibly important.  The simple truth is that the language surrounding our food and its biology is often being obscured, and we as consumers and cooks need to start changing that. Marketing groups and retailers will explain that consumers don't want to be confused by their food, and their is some truth to that - I wouldn't be surprised if consumers balked at being presented with literally dozens of different species and harvesting methods while shopping for shrimp. But food culture is becoming more adventurous and global in its reach, and if that's going to happen sustainably then we need to open our minds to learning about ideas, and yes, new problems. But that awareness of new problems should not intimidate us - instead, we should feel empowered and involved. We develop deeper understandings of the world and its people when we expand our culinary horizons, but we have an undeniable impact when we reach beyond what we already know. Fortunately we have the ability to make that impact a positive one. If my discussion of shrimp has scared you off a little, this dish will also work beautifully with crab, lobster, or even a simple firm-fleshed white fish. You could also use more clams and omit the crustaceans entirely.

Most grocery store clams have been purged of sand and grit, so they should be fairly clean. If you're concerned, or you've obtained your own clams and you need to purge them, I strongly recommend a simple salt-water based method like the one used here. Despite what you might read elsewhere, there's no need to use cornmeal to clean clams.

The natural saltiness of the clams, black beans, and the soy sauces means that a conventional salt-added chicken stock can risk making this dish very salty. If you can't get a no-salt stock, I would recommend just using water, and possibly an extra tablespoon of clam broth.

As with many Chinese dishes, this one can still seem salty on its own, which is why it's at its best when served over rice or with noodles. A nice thin wheat noodle works well, but rice noodles should make a good accompaniment too.

Most of the ingredients needed for this recipe can be found in a well-stocked grocery store, but you'll probably need to seek out a Chinese grocery store for the douchi and mandarin peel. For what it's worth, store-bought mandarin peel is relatively easy to find, but even easier to make at home - simply wash and scrub a mandarin orange, then peel zest and a little bit of the pith with a vegetable peeler and allow it to dry. I like to toast mine in the oven just a little bit for an added flavour dimension. 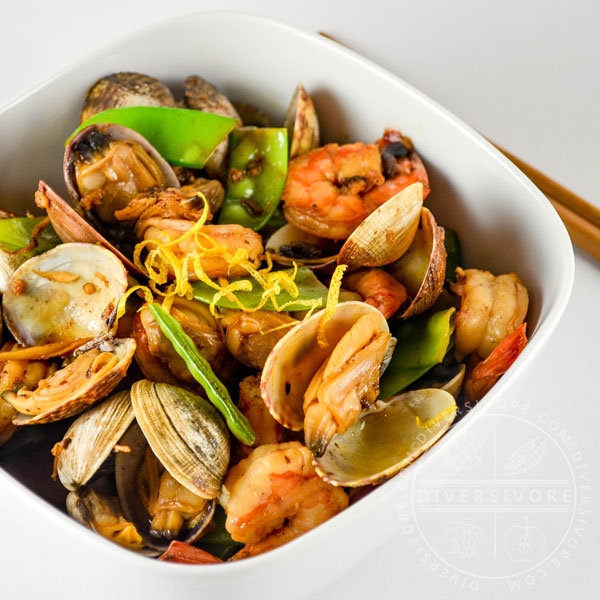 Note: nutritional information is shown for a single serving (1/4 total recipe) and does NOT include rice, noodles, etc.

GOOD NEWS:
High in protein and iron while still very low in fat, this dish demonstrates the wonderful nature of good seafood.
BAD NEWS:
This is a bit high in sodium, and has the chance to be VERY high if you don't properly soak the douchi (black beans). Make sure to follow the directions carefully. This is also relatively high in cholesterol thanks to the shrimp.

If you do choose to serve this with a noodle, try to choose one that's low in sodium. Some packaged Asian noodles can be astonishingly salty. Shrimp and Clams in a Black Bean and Citrus Sauce

The natural saltiness of the clams, black beans, and the soy sauces means that a conventional salt-added chicken stock can risk making this dish very salty. If you can't get a no-salt stock, I would recommend just using water, and possibly an extra tablespoon of clam broth. Doing so also makes the meal pescetarian. As with many Chinese dishes, this one can still seem salty on its own, which is why it's at its best when served over rice or with noodles. A nice thin wheat noodle works well, but rice noodles should make a good accompaniment too.