As no-waste cooking becomes more and more mainstream (hooray!), we're starting to see a greater diversity of recipes for the frequently neglected greens and tops from our favourite veggies.  Beet greens make up a pretty substantial portion of the beet plant, and they're a wonderful vegetable in their own right.  The tasty leaves can be cooked much like spinach - but what about the stems? You can cook them along with the greens, but they're tougher and a little more strongly flavoured.  The leaves cook very quickly while the stems take a bit longer, making them a little harder to factor into your cooking.  On top of this, some varieties of beets grow exceptionally long stems, meaning that you might have a lot of stem to work with.  Instead of shoehorning them into a recipes along with the leaves, but why not let them take center stage as a simple, delicious, spicy-sweet pickle?

If you know someone who's shied away from beets because they’re a little too earthy, I highly recommend giving them a few of these pickle beet stems to try.  On their own, the stems taste similar to the roots, but with an added crunchy ‘greenness' that brightens their taste considerably.  The sweet and sour brine mellows the earthy flavour further, and makes the whole thing taste distinctly bright and exotic.

These beet stem pickles require no hot water bath canning, and very little in the way of preparation.  The simple sriracha-and-honey-infused brine comes together in only a few minutes, making the whole thing wonderfully low-effort.

I've been making this recipe for about ten years now, having first adapted it from a pickled swiss chard recipe from Bon Appetit.  This recipe departs pretty heavily from that one however; the sugar is toned way down, the vinegar is mellower, and the spices are a little more complex.  Plus, thanks to the magic of beets, the whole thing comes out spectacularly burgundy-red.  The amount of spice from the Sriracha isn’t overwhelming, but provides a nice heat and well-rounded flavour.  And if you do want a little more fire, it's easy to kick it up a bit. 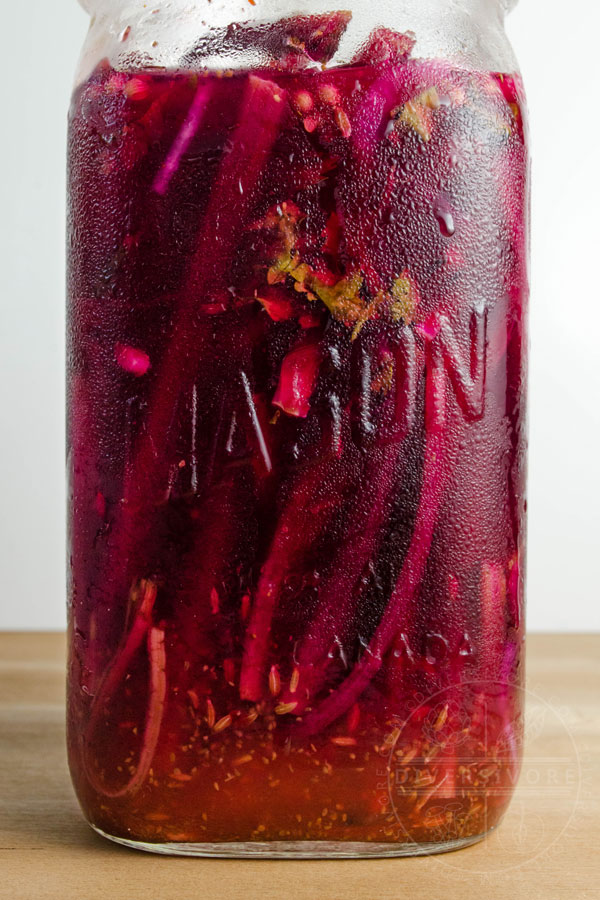 This is about as easy as pickling gets, so there's not much to worry about here in the recipe notes.  I will go into a couple of notes about the spices (and the spiciness) and give some tips on finding beet stems and/or substitutes.

These pickled beet stems will keep very well in the fridge for months, so don't worry too much about shelf-life.  Please note that his recipe has NOT been tested for hot water bath canning.

This recipe tends to fill up a single quart/liter canning jar with some brine leftover.  This assumes that you pack the stems in fairly tightly (which is relatively easy to do, especially with a wide-mouth canning jar).  You can also use two pint (half liter) canning jars, but you'll want to ensure that you split the pickling spices evenly between the two.

Because it can be difficult to exactly determine how many beet stems you'll get from a few bunches, and/or how much space the stems will take up, I also like to prepare an additional small (half pint/quarter liter) jar to accommodate any 'overflow.'

Even though we're not using a hot water bath to can these beet stem pickles, I strongly recommend that you use good quality canning jars, as these will accommodate the addition of hot brine without cracking.  If you don't have canning jars, you can also make this recipe using a sealable Pyrex glass container.  If you're not sure whether or not your glass jars are heat-safe, you can play it safe by preheating them in a pot of hot water or in the dishwasher.  Avoid using cracked or chipped glass. 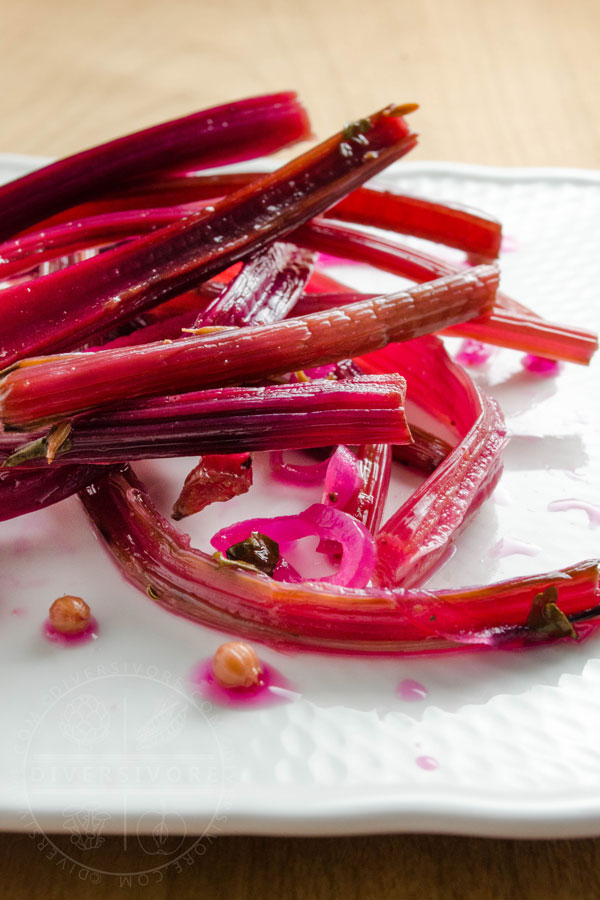 The spices used here make up a pretty typical pickling blend, but there's no reason you can't adjust them if you feel like it.  I personally think that the celery and coriander seeds work especially nicely with the earthy sweetness of beets, but you could always try taking this in a different direction too.  Star anise and mustard seeds would make interesting additions.  If you don't have the exact quantities you need for this recipe, don't worry about it too much.  It's ok to be a little inexact when it comes to pickling spices.

I use sriracha hot sauce as the heat source in this recipe.  It tastes great, and it gives you good control over how hot the pickles turn out.  The recipe as-given isn't all that spicy, so if you do want to bring the heat, you can either add more sriracha, or include some dried chilies with your pickling spices.

The best place to find beet stems is... attached to beets.  All kidding aside, beet greens (and stems) are basically never sold on their own.  Many large grocery stores sell beets without greens, but an increasing number green grocers and most farmer's markets will sell them with the greens attached.  I've been able to score free beet greens from some markets in the past, as some people prefer to rip them off at the store and leave them behind.  Their loss, your gain.  Just be sure to ask someone before you waltz out with a bag of free greens.

If you don't have quite enough beet stems to make this recipe, you do have a couple of options.  First, you can always cut the recipe size down (a fairly easy process).  If you want more pickles but you're short of beet stems, there are several options.  First, you can add in some chard stems.  They're very closely related, and if you use a red/pink chard they're quite difficult to distinguish from beet stems.  Chard does tend to have much broader stems though, so I recommend slicing them lengthwise into small strips.  If you have an abundance of chard, you can also replace the beet stems entirely - though I do think that you lose out on some of that earthy-sweet beet flavour.  Another option is to add some extra veggies.  The recipe already includes onion, so you can up the quantity to pad out the recipe.  Another fun option is to add some thinly sliced celery sticks.  These will absorb a lot of flavour from the beet stems and the brine, and they contribute a great crunchy texture.

The beautiful beet-red colour of these beet stem pickles is one of their big selling points, but you can also make it with the yellow or green stems that you find on some varieties of chard and beet (golden and white beets, for example).  Using even a small number of red beet stems should colour the entire brine pretty easily. 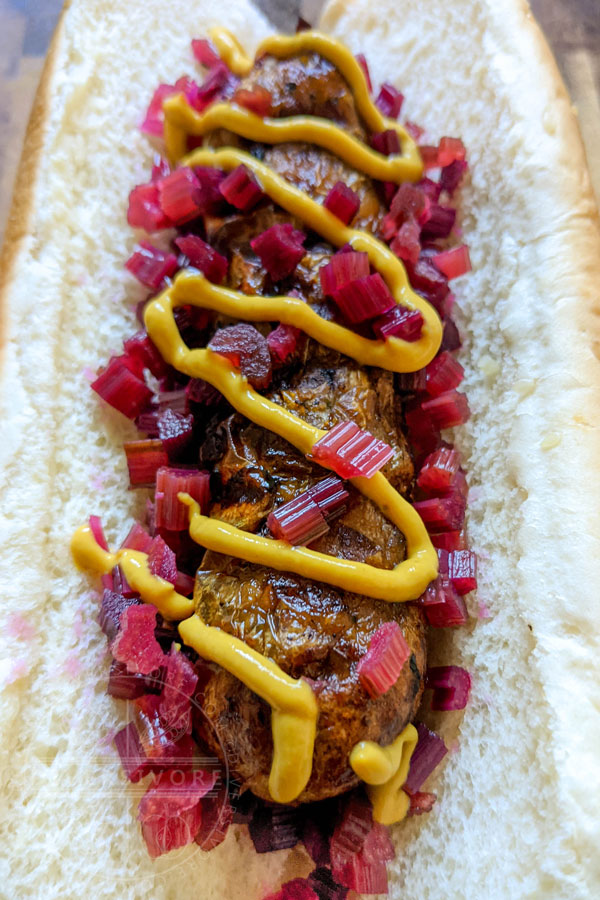 You'll most likely find yourself munching these addictively crunchy pickled beet stems right out of the jar, but if you're looking for ways to incorporate them into a meal, I really like chopping them up into a relish. Grab a bunch of the finished stems, dice them up, and you're good to go. I threw some onto some plant-based Italian sausage (see above) with mustard and was thoroughly impressed.

I've only made this using lengths of beet stem, but I don't see any reason that you couldn't make it as a relish right off the bat (i.e. by dicing the beet stems and onions before adding them to the brine).  If you want to avoid getting a bite of whole spices in your relish though, you might want to put them in a small cheesecloth bag (or something similar) so that you can easily separate them from the finished relish.  If you've given this a try, I'd love to hear from you in the comments!

If you want to avoid using honey in this recipe, you can use an equal quantity of brown rice syrup, agave syrup, or a light maple syrup.  Note that maple syrup will contribute a distinctive flavour, but it actually works quite nicely with beets!

You can also avoid liquid sugars altogether and add more simple granulated sugar.  Honey tastes sweeter than sucrose-based sugars, so you may need to add an extra 1-2 tablespoons to account for this.  That being said, it's already a fairly sweet pickle recipe, so if you're looking for a little bit less sweetness, you can round down too.  Because this is a fridge pickle and not a canning recipe, you've got a little more leeway with the preserving agents.

Note: Nutritional Information is given for a large single serving (1/20th portion of the total recipe), and includes a portion of the brine. Sugar and salt levels will be lower than what is shown without the extra brine.

GOOD NEWS:
All in all, these are a fairly neutral or slightly positive addition to any meal. You'd have to eat an awful lot of these to have a major impact on your daily nutrition, but they do have a respectable level of Vitamin A.
BAD NEWS:
Sweet pickles like these use a fair bit of sugar. That being said, you're not really getting all that much in a single serving, and if you aren't actually consuming the brine, you're getting even less. Sugar Note: I use simple granulated white sugar for this recipe, but you can use a less refined granulated cane sugar if you like. Honey Note: If you don't want to use honey, you can substitute an equal quantity of brown rice syrup or agave syrup.  You can also use light maple syrup, though it does contribute a flavour of its own.  If you don't want to use a syrup, you substitute with sugar.  Honey is sweeter than sucrose, so you might want to add 1-2 extra tablespoons to make up the difference in flavour. Spiciness: If you’re particularly fond of a fiery hit of spice, feel free to double the amount of sriracha in this pickle recipe. Relish Option: You can finely dice the beet stems to use as a relish (drain the excess brine before serving). Quantity Note: This recipe tends to fill up a single quart/liter canning jar with some brine leftover.  Because it can be difficult to exactly determine how much space the beet stems will take up, I also like to prepare a small (half pint/quarter liter) jar to accommodate any 'overflow.' 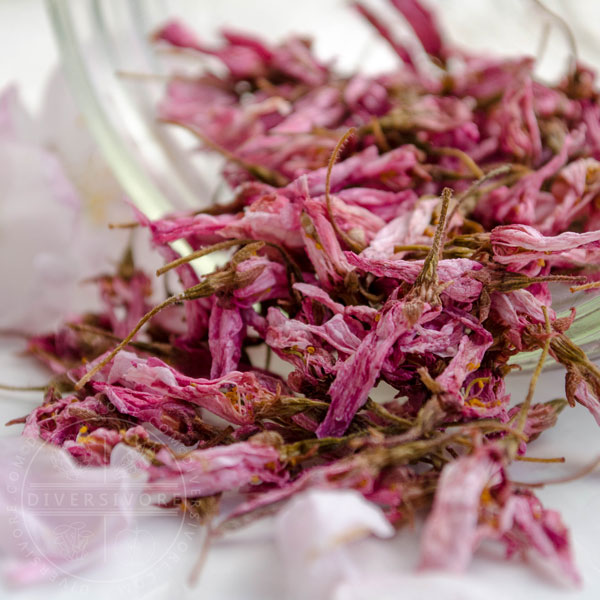