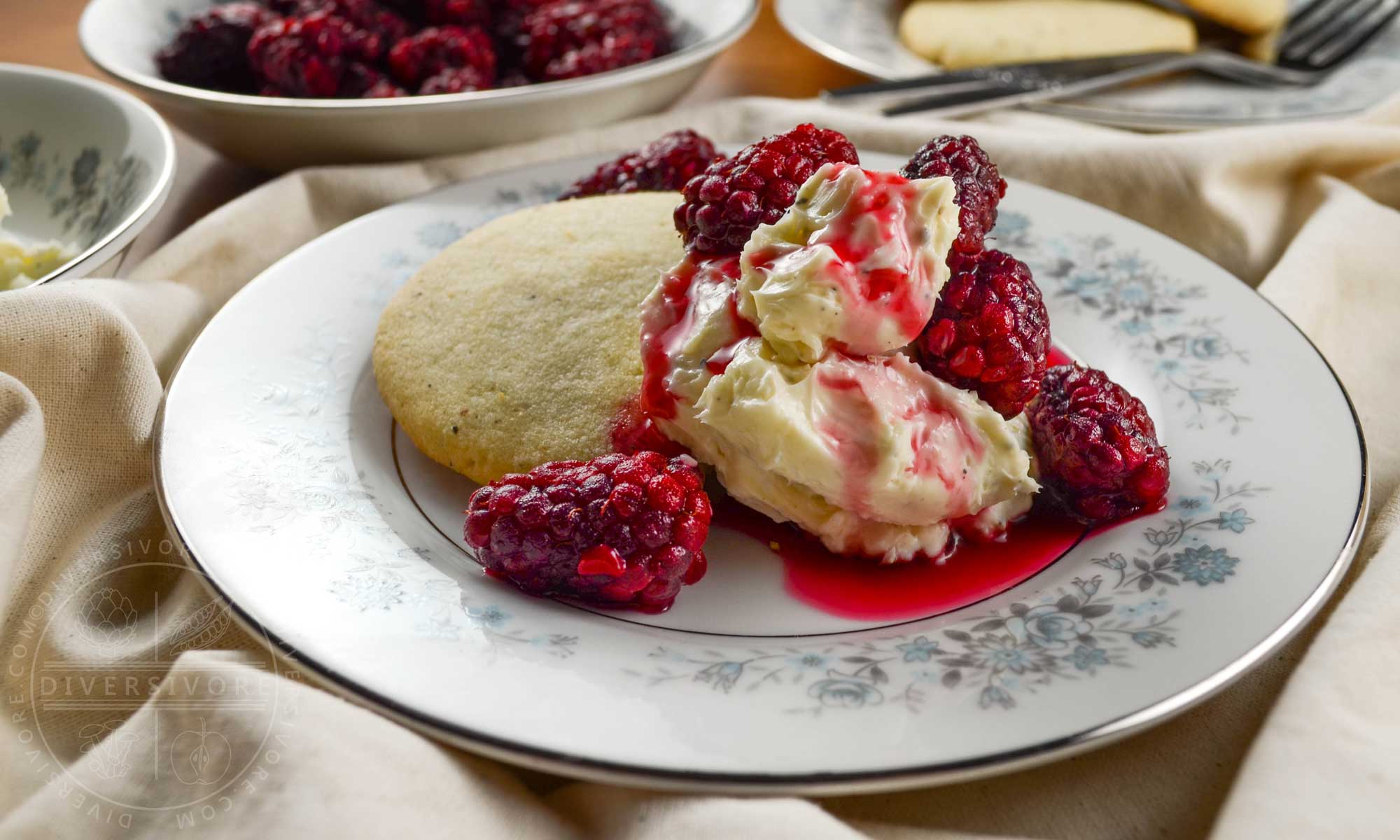 If I was considerably more gifted at programming, I'd insert a seasonally appropriate opening to this recipe. Sort of a quantum holiday/non-holiday thing, depending on whether or not you're reading this while looking for an out-of-the box holiday cookie recipe, or for something summery and different to do with the tayberries you've discovered and come to love. Schrödinger's cookie box, if you will.

I've landed upon a little holiday tradition here on Diversivore.  It's nothing too fancy really - I post shortbread recipes around Christmastime, and generally go off on some sort of a (hopefully) humorous little holiday rant.  As is so often the case with new traditions, I didn't set out to make this 'a thing,' but it's become a thing all the same.  I'd like to think that the popularity of these recipes has something to do with my quirky and tongue-in-cheek writing, but it's probably more to do with the fact that... well, people like cookies.  I can live with it either way.  This year however, I'm not pushing the wintry/holiday side of things too hard - instead I wanted to use my shortbread recipe habit to explore some bolder and less commonly encountered flavours.  And if you've encountered this recipe because of a love (newfound or long-held) for tayberries, then I hope you'll feel free to give this recipe a shot no matter what the date.  Honestly shortbread is ridiculously delightful at any time of the year anyway, so I'm hoping you won't mind me trying to break this recipe out from beyond the confining walls of seasonal baking.

If you're looking to try this recipe out but you're unsure about how to get, use, or substitute some of the ingredients, don't worry - there are plenty of details and options in the Recipe Notes section below. Christmas cookies fill me with joy, and I'd bet that most of you feel the same way. We love making them, and we love eating them. But holiday DESSERTS? Well now we're getting into some sketchy territory. The holiday cookie is a fun, family-friendly treat, but desserts are generally a more high-stress affair.  They're often labour-intensive at a time of year where most of us have neither time nor energy to spare, and yet we invariably find ourselves needing to roll them out at some point or another. Holiday party with VIP guests? Fancy dessert. Judgy relatives coming over? Fancy dessert. Getting together with those impossibly gourmet foodie friends you're desperately trying to keep up with? FANCY DESSERT. High-stress, high-stakes, fancy dessert.

Salvation, my friends, comes to you in the form of shortbread.  Cookies are simple and family friendly, but with only the simplest of culinary tweaks they're transformed into a fancy-pants dessert that will surely impress and delight.  Heck, you can even dress things up further by throwing extra adjectives into the mix (it works for restaurants after all).  Might I suggest "Cracked Black Pepper Shortbread with a Tayberry Compote and Sweet Whipped Pepper Cream-Cheese." Not just fancy, but fancy-schmancy!  But the very best thing of all (and you can keep this bit to yourself of course) is that the whole recipe is ridiculously easy, and can be made in advance.  Yes friends, no checking on the oven, no trying to decorate or prep while simultaneously worrying about a big holiday meal - just make it a day or two ahead of time, forget it, and serve it when you're ready.

Seriously though, this can be as simple or as fancy as you like. Shortbread's simplicity makes it a lot more versatile and adaptable that many people realize, and you can switch up or omit any aspects of this recipe if you want to.  Pepper and tayberries (or similar fruits - see below) pair beautifully with the sweet, buttery cookie. And while I love the tangy/creamy kick from the sweet cream cheese, you could easily drop it in favour of a simpler (and lighter) dessert.  So if the holidays are leaving you a little frazzled at the edges, remember the Diversivore holiday mantra: no stress, no trouble - just cookies. I would be remiss not to go into more detail over a couple of aspects of this recipe - not because they're difficult to do, but because they're a little less familiar to many readers. Rest assured that if you've ever successfully baked a cookie you're going to have zero problems with this recipe. With that in mind, let's take a look at a few of the components.

Tayberries are (and I'm genuinely not exaggerating here) one of my absolute favourite fruits. They're a fairly modern hybrid between a raspberry and a blackberry, developed in Scotland and patented in 1979. Blackberry/raspberry hybrids aren't all that uncommon in modern agriculture - the somewhat better-known boysenberries and loganberries share the same parentage. But tayberries are, to my mind anyway, the superior fruit. They've got a raspberry-like juicy sweetness, limited acidity, and the wonderful floral character of blackberries.

If you're wondering why something so tasty isn't more common, it mostly comes down to agricultural feasibility and economy.  The fruits can only be picked when they're completely ripe, at which point they're extremely soft and prone to crushing.  This means that they can only be hand-picked, and that they won't last on shelves for long.  These factors make tayberries more-or-less unmanageable as a commercial crop.  However, their fantastic eating quality has made them popular with gardeners and u-pick farmers, for whom the delicacy of the berries isn't a hindrance.

As you've probably deduced, you're very unlikely to find tayberries in grocery stores.  Your best bet for getting your hands on them is most likely going to be checking out the u-pick or small-scale fruit farms in your area.  If you live in the Greater Vancouver area, check out Emma Lea Farms in Ladner, BC.  It's a wonderful spot, perfect for the family (seriously, there's ice cream and a playground and everything), and they have great tayberry bushes, along with some other hard-to-find fruits.  And for what it's worth, this isn't a sponsored shout-out; I just love berry-picking there, and I'm sure you'd love it too.  Just be sure to check out the availability and seasonality on their website before you go.  The fruits freeze nicely, so feel free to pick a lot of them to save for later in the year.

Another great (albeit slow) way to get tayberries - grow them! If you're thinking about planting tayberries them and you've come across this recipe by way of research, I'd urge you to go for it.  The bushes are productive, and mercifully limited to small and unobtrusive thorns.

Alright, tayberries are awesome - but what if you can't find them? Well, you could try the related blackberry/raspberry hybrids I mentioned above (boysenberry, loganberry, etc.), or you could just use raspberries, blackberries, or a combination of the two.  There's nothing to keep you from branching out and exploring other fruits here either.  As I pointed out in another recent recipe, black pepper is amazing with strawberries.  You could easily steal the sauce component from that recipe and use it here - it would be fantastic with the sweetened cream cheese too. The sweet, peppered cream cheese in this recipe is very easy to make, and you can make it with any kind of cream cheese, but if you get the chance, try to look for a little-known Canadian specialty called Winnipeg cream cheese. It's lighter in texture, smooth, creamy, and a little less 'cheesy' than a typical cream cheese - all factors that make it ideal for desserts like this.  It's something of a niche product of course - if you're in Canada (and especially Winnipeg, obviously), try calling around to some cheese shops to see if they carry it, or something similar.

Needless to say given the global nature of food blogging, there's a pretty good chance that you won't be able to pop into the store to get Winnipeg cream cheese.  No problem.  Any cream cheese can be used here, but I would urge you to seek out something with a higher fat content and fewer stabilizers.  If you have the option of getting something freshly made (e.g. from a creamery) go for it.  If you get a typical, denser cream cheese, I strongly recommend that you take note of the instructions about whipping it with an electric beater/mixer.  More air whipped into the cream cheese makes for a lighter tasting, airier mixture, which is what you're going for here.

Don't feel limited to just cream cheese either - mascarpone cheese would make an excellent, decadent substitution.  Want to go in a lighter, leaner direction? Try using quark or ricotta.  They won't be exactly the same obviously, but they'll still work nicely with the black pepper and the fruit. I can't believe we got this far without talking about this.  I guess I got distracted by weird fruit and regional Canadian dairy products.

Yes, black pepper short bread - and black pepper in the cream cheese.  It sounds distinctly savoury, I know.  But black pepper is actually wonderfully complimentary to fruit, and to the tangy/rich flavour of the cream cheese.  There's not a ton of it in the recipe, but it does contribute a lot.  And after all, we're not averse to adding plenty of other spices to our desserts, so there's no reason to shy away from the pungent and piquant bite of pepper.  If you want to read a bit more about the chemistry of black pepper and fruit, I've written about it recently in another dessert recipe - check it out here.

I personally think that the black pepper really make this dessert pop, but if you want to omit it you can do that too.  If you're cooking for a mixed bag of picky eaters, you could always omit the pepper from the cookies, but leave it in the cream cheese (or vice versa). Note: Nutritional Information is given for a single serving (1/12th portion of the total recipe, i.e. two cookies, and a portion of tayberries and cream cheese).

GOOD NEWS:
Much lower in calories than many desserts, and not too high in sugars either. As sweet treats go, this one's pretty innocuous.
BAD NEWS:
Saturated fat, of course! Darn you, delicious, delicious cream cheese.
TRIM IT DOWN:
The nutritional info given includes two cookies, so you could always start by cutting back the serving size a bit. Beyond that, consider swapping the cream cheese for quark or ricotta (both much lower in fat). Adding more fruit never hurts either. Winnipeg-style Cream Cheese - this somewhat obscure Canadian specialty is a lighter, airier, and particularly creamy cream cheese.  It's not all that easy to find, so if you can't get it, simply substitute a good (ideally fresh) cream cheese.  Try whipping this up with an electric mixer to get more air into it and make it lighter and more spreadable. Note: the tayberries and cream cheese can both be made in advance, and both will keep well in the fridge (the berries for a few days, the cream cheese for at least a week).