There's not much in this world that's more comforting than a big, bubbling pot of stew. Stewed dishes are pretty universal in their appeal, and nearly every culinary tradition around the world has some variation on the idea of slowly simmering foods in a flavourful liquid. To give you an idea of what I mean, Wikipedia's List of Stews currently contains 149 different entries, and I'm pretty sure I want to try every last one of them.

Though I've only recently started experimenting with them, I have to say that Japan's stews, collectively called nabemono (basically 'things simmered in a pot') have a lot going for them. They're endlessly variable, but unlike many stews, nabemono dishes are often fairly quick to cook, as they tend to omit tough, slow-cooking meats, instead focusing on vegetables and more delicate proteins like tofu or seafood. This makes them ideal for situations where you want a simple bowl of comfort-food without spending the whole afternoon tending a pot.

This particular invention of mine is a twist off of a Classic Japanese noodle dish, couple with a bit of tongue-in-cheek biology. Kitsune is the Japanese word for fox, though I can assure you that this particular nabe (pot) doesn't contain any fox. In Japan, as in so many cultures, foxes hold a special place in folklore and mythology. They are portrayed as shape-shifters and beings of significant mystical power, able to manifest themselves in dreams and even possess the minds of individuals. Kitsune were traditionally revered as servants of the Shinto god of rice, Inari Okami, which has given them a special significance in relation to food and harvesting. As a result, many temples and shrines in Japan have an altar or statue dedicated to foxes. This folkloric connection to food goes beyond rice however; Kitsune are said to be particularly fond of fried tofu, called abura-age, so its inclusion in a meal is often indicated by appending the moniker 'kitsune' to meal. If you've ever perused the noodle section of a Japanese menu, there's a decent chance you've seen a dishes called Kitsune Udon and Kitsune Soba - both dishes are so-named because they contain abura-age. Inarizushi, the delicious little fried tofu pockets filled with sushi rice, are named for Inari Okami for similar reasons. This kitsune nabe is packed with fried tofu (though I elected to go with the large puffs rather than the thinner sheets), but the biologist in me decided to pay the non-folkloric fox its due by including quail eggs. In this case, the fox was tricky enough to score a clutch of eggs, but not the quail itself.

Ok, that's a fairly long aside to talk about names and folklore (admittedly two topics I can get into it pretty easily). Let's talk about the other things going on in this pot. The cabbage, eggs, and even the tofu are all relatively neutral ingredients, though they obviously shape the final flavour of the meal. The shimeji mushrooms are mild and pleasantly nutty, but they too keep a pretty low profile for the most part. The most prominent flavours - the ones that will mix and mingle and create a crave-worthy stew - come from the dashi, miso and the chrysanthemum greens. I've said this before about Japanese food and I'll probably say it again, but starting your meal with a good scratch-made dashi will make a huge impact on your final dish. Dashi is basically an umami broth, and it transforms all kinds of ingredients into savoury flavour-bombs (new band name?). You could try any number of miso pastes with this depending on your tastes, but I used the fantastic organic red miso from Amano foods for an earthy and mellow, but very rich broth. Chrysanthemum greens (called shungiku in Japanese) are not terribly well-known to many home cooks, but they're worth searching out (they tend to be easily found at Asian grocery stores, especially in the winter and spring). Unlike many greens, they are definitely NOT mild and neutral. They have a powerful flavour that's quite difficult to describe, though if you've ever had chrysanthemum tea you'll have a sense for what I mean. In any case, the impact that they have on this meal is unmistakable and unforgettable. One last ingredient makes a standout appearance here, and that's the shirataki. These odd, translucent little noodles are quite neutral as well, but they're pretty remarkable. They're made from an unusual root called konjac (pronounced kon-yak), and because they're composed of an indigestible starch, they're free of calories, carbohydrates, and gluten. Basically, they're neutral noodles. Neutrals? Nootrles?

Oh, and if you'll allow me to bring things full circle, I'd like to mention one last name. The konjac plant is in the genus Amorphophallus, which means... misshapen penis. So that's, uh... something to think about. I think I'll stick to thinking about foxes. Look for shirataki noodles like the ones I used (they actually come all tied up in cute little packages like you see in the photos) in the refrigerated section near the tofu at Japanese and Asian grocery stores. Much like tofu, they come floating in floating in water in plastic packages.

To convert this into a vegan dish, simply follow the vegetarian instructions and omit the eggs. The miso and kombu add a lot of wonderful umami flavour and richness, so you don't worry about ending up with a watered down final dish! Nutritional info is given for a single serving (1/8th total recipe). Note that using noodles other than shirataki will increase the calorie and carbohydrate count a fair bit.

GOOD NEWS:
This is exceptionally healthy food. This serving size is pretty big already (about 400 g), but even if you were to eat a large second helping you'd still be coming out on top. High in protein and vitamins, relatively low in fat and carbohydrates, and relatively low in sodium (especially for a dish with miso and tamari).
BAD NEWS:
As the recipe stands now, there's no bad news, but shortcuts like instant dashi or substitutions like regular noodles could up the sodium and/or calories substantially. Plan accordingly. Traditional Japanese stocks generally contain katsuobushi, which is made from skipjack tuna. If you want to make this dish vegetarian, simply omit the katsuobushi or add the liquid from re-hydrating 3-4 dried shiitake mushrooms in its place. To convert this into a vegan dish, simply follow the vegetarian instructions and omit the eggs. 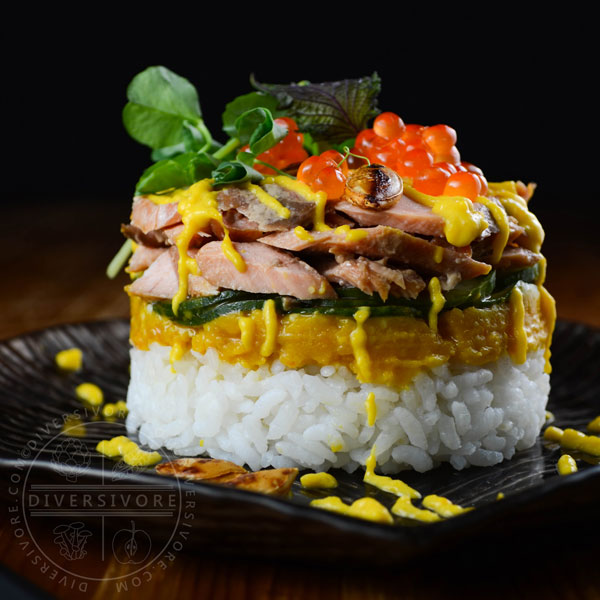