When I started working on this series of savory pancake varieties, I had no idea that I’d also be launching myself into a series of posts about the complexities of language as they relate to food blogging, and yet that’s exactly what I’ve done. I’ve already explored the problem with the letter ‘u’ in the main post, and talked about what to call smoked sausage in one of the variations.  Now I’ve got myself a very different problem, but one related to language: what do you call a pancake made with kimchi when the term ‘kimchi pancake’ is occupied by something else entirely?

Let me explain by telling you what this recipe is, and what it is not.  These are North American-style fluffy pancakes, made in a savory (i.e. low sugar) style with Korean ingredients; and unapologetic a fusion recipe.  They are NOT, however, kimchi-buchimgae (김치부침개) – a traditional Korean food also called kimchijeon, generally referred to in English as a kimchi pancake.  These are pancakes made with kimchi, but they’re not kimchi pancakes.  See what I mean?

Kimchi-buchimgae is a fantastic dish, but it’s very different from a fluffy North American style pancake.  The Korean home-cooking specialty consists of a thin, unleavened pancake made with a higher ratio of kimchi to batter than you see here.  It’s also flavoured with the bright red brine from the kimchi jar, giving the finished pancake a bright orange-red colour.  This recipe, on the other hand, is a Western-style pancake, leavened with baking powder, and made with milk and butter.  If I was opening up a trendy Korean brunch joint, these would be the focal point of the menu.  Honestly, they’d be the only thing on the menu right now, but I’ll concern myself with the minutiae of launching and operating an imaginary restaurant another time.

You’d be forgiven for thinking that authentic kimchi-buchimgae was my primary source of inspiration for this recipe, but the truth is that I actually thought of them only after developing the initial idea. The primary inspiration for these pancakes actually came from my wife’s approach to eating kimchi.  My homemade kimchi (which I will publish one of these days soon, I promise) is one of my wife’s favourite condiments.  She’ll sneak a little out of the jar and add it to just about anything when she’s making a snack or a quick lunch.  Everything is better with a little kimchi, apparently.  It was her ‘why not?’ approach to kimchi that actually made me think that the spicy, fermented cabbage would make a great accompaniment to a basic pancake recipe.  And you know what? My wife is brilliant.  Kimchi does make everything better, and it makes for absolutely amazing, if somewhat unorthodox fusion pancakes. The basic batter for this recipe is quite easy to make, but if you’re looking for any tips, or if you need to troubleshoot a little bit, check out this main post in my savory pancake series.

I’ve been talking about the kimchi part of the equation so far, but the recipe is all about kimchi AND seafood, so let’s explore the options and a few tips to working with them both here, as well as some possible variations.

I used market squid (Loligo opalescens) in these pancakes.  It’s readily available here on the Pacific coast, and environmentally sustainable.  On the East coast of North America you can generally find the similar (and similarly sustainable) longfin inshore squid (Doryteuthis pealeii).  If you’re buying frozen squid, check to see where it’s coming from, as some fisheries are much more environmentally impactful than others (the Asian fisheries are not very well regulated at the time of writing).  For more information check out this page from Oceanwise.

Small squid varieties have the advantage of being easy to prepare and fast cooking.  You can find larger squid species (e.g. Humboldt squid, Dosidicus gigas) and those can be substituted here, but you’ll want to ensure that you cut the thick meat into very thin pieces.  This will ensure that they cook quickly and don’t make your pancakes too chewy.  On that note, take care not to cook any type of squid for too long, or it will become rubbery.  Properly cooked squid should be firm, but still tender.  Keep in mind that the squid will cook a little bit more inside of the pancakes once they’re on the grill, so if anything you want to err on the slightly underdone side when preparing the squid to go into the batter.

Want something other than squid? Shrimp are another great option.  I recommend a small shrimp variety like pink shrimp (aka northern coldwater prawn, Pandalus borealis).  You can use a larger prawn/shrimp species too, though I would recommend dicing them into smaller pieces so that they cook evenly and mix nicely into the batter.  You can find more information about choosing sustainable shrimp varieties on this page from Oceanwise.  Small clam Manila clams would also be quite good here – you could use fresh if you have the time to prepare them, or buy frozen.  Whatever seafood you do use, make sure you precook (but don’t overcook) it before adding it to the batter. Most seafood will release some liquid into the pan while it cooks – make sure to use this to help yourself out.  Stir the gochujang into it, and add it into the batter along with the seafood.  There’s usually a lot of good flavour there.

Because the kimchi is delivering big on the flavour here, you can easily get away with simply omitting the seafood. I would still recommend sauteing some shallots with a bit of gochujang (and possibly a splash of water to mix everything together). You can also add a little extra kimchi to the batter if you like, though I personally prefer to leave the pancake the way it is and garnish with extra kimchi, allowing everyone to adjust to their own desired level of spiciness. If you can get gim (Korean seaweed – the equivalent of Japanese nori), it’s great for topping off the finished vegetarian pancakes, as it adds a salty, slightly briny punch.

Do note that if you’re looking to keep things vegetarian you’ll want to pay attention to your kimchi; while vegan recipes can certainly be found, much traditional kimchi is made using sardine sauce and/or salted brined shrimp. 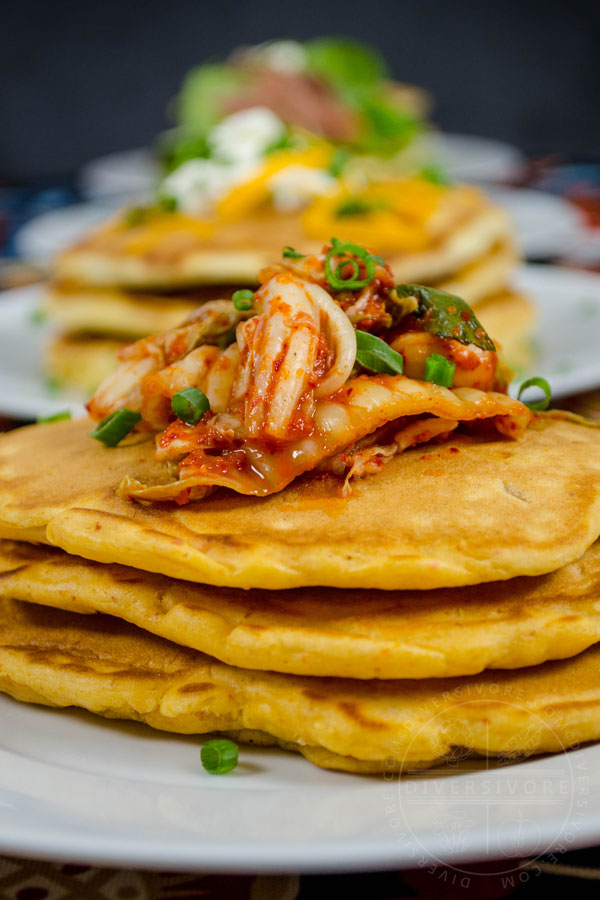 Good quality kimchi is, wonderfully, increasingly easy to find.  If your city has a Korean market or district, that should be your first stop.  Many will even have in-house kimchi, often available by weight in a serve-yourself sort of set up.  If you don’t already have gochujang, a Korean market would be the place to get that too.

No Korean markets? Most large pan-Asian grocery stores should stock at least some kimchi.  Look for something fresher, and with fewer preservatives.  Japanese and Taiwanese grocery stores may also sell kimchi, as it’s quite popular in both of those countries (though each may have their own slightly different take on it).  Lastly, you might find it at trendy health-focused grocers and some high-end stores, as it (and fermented food in general) has become fairly popular and trendy across a range of cuisines.

I personally make my own kimchi, and I can say with confidence that it’s both easy and delicious (better than store-bought, in my opinion).  I’m hoping to post the recipes soon, and when I do I’ll be linking them back here, so check back in or subscribe for updates.

If you have any dietary restrictions against seafood, make sure you check the labels on your kimchi.  Traditional kimchi is often made with a sardine-based fish sauce and/or salted shrimp or other seafood.  Many store-bought brands are vegan, though I don’t know if this is for dietary reasons of for reasons related to shelf stability.

Lastly, a quick note about the age of your kimchi.  Kimchi is a living fermented food, and it will change in character as it ages (even in the fridge).  Older kimchi tends to taste more sour/acidic, with more complex and mellow undertones.  Young kimchi is a bit more herbal, with less acidity/sourness and a bit more of a chili-focused flavour.  I used young kimchi to make this (the pictures you see are from a recent batch that had only just finished aging on the counter), but traditional kimchi-buchimgae tends to use older sour kimchi.  Either will work nicely here. In fact, you should try both to see what you like best! Note: Nutritional Information is given for a single serving (1/6th portion of the total recipe), including extra kimchi to garnish.

GOOD NEWS:
Low in carbohydrates and fairly low in overall fat.
BAD NEWS:
A bit high in cholesterol (squid and eggs together) and saturated fat, so take note if you’re trying to keep limit your intake.
TRIM IT DOWN:
If you’re looking to cut the cholesterol a bit you can make the vegetarian version of this, or use clam meat in place of the squid. Note that shrimp, like squid, is fairly high in cholesterol. You can also reduce the serving size and have these with more kimchi and other vegetables. A bit of Korean/American fusion in the form of a delicious and wonderfully easy-to-make pancake.

Squid vs. shrimp - I used thinly cut strips of squid, which cook quite quickly.  If you use small (or chopped) shrimp instead, your cook time might need to be increased a little bit.  That being said, the ingredients will cook a bit more in the pancakes themselves, so try to take care not to overcook your seafood or it will end up rubbery.

Vegetarian variation - you can simply omit the seafood, and instead cook the shallots with a little gochujang before adding them (and the kimchi) to the batter.  Try topping with some gim (seaweed) before serving to add a bit of a marine punch.

See the Other Variations