In the central post for this series of savory pancakes I write about how I use the word savory without a ‘u’ in order to make the recipes more readily discovered by search engines, despite the fact that my Canadian brain desperately wants to add it in. Through some strange coincidence (or subconscious bit of sabotage), I’ve put myself in a similar situation here. This delicious sausage and sweet corn pancake recipe has, oddly enough, forced me to once again confront the competing interests of search engine optimization and my own linguistic heritage, and it’s all because of a little sausage.

I grew up in central Alberta – Canada’s sausage country. Yes, we have sausage country, though as far as I know there’s no official designation as such. Albertans are particularly proud of their sausage – specifically, cooked/smoked central European style sausage (if you’re not particularly familiar with this sausage, or if you’re thinking you might call it something else entirely, check out the Recipe Notes section below). I grew up calling it ‘kobasa’ (KOO-buh-saw) which is, I have only recently come to learn, a uniquely Albertan pronunciation of the Ukrainian kovbasa (ковбаса). Obviously this style of sausage did not develop in Alberta, but was instead a cultural import, brought over by waves of farming immigrants.

Alberta and Canada’s other prairie provinces have long been called the breadbasket of Canada, thanks to their incredibly rich and productive agricultural lands. The promise of peace and cultural/religious freedom, coupled with the comforting familiarity of farm living, drew many central European immigrants to the area in the 19th and early 20th centuries.  German Anabaptist groups (Mennonites and Hutterites) came to Canada in droves, as did large numbers of Poles, Ukrainians, and others seeking freedom from the oppressive and impoverished conditions they faced in the Austro-Hungarian and Russian empires.  In particular, the Ukraine (the breadbasket of Europe) was the source of a substantial wave of immigration to Canada – some 170,000 people arrived between 1891 and 1914, seeking freedom and the promise of prosperity.  Moving from one breadbasket to another must have made quite a lot of sense to those looking to transfer their farming skills to a new land.  The initial influx of Ukrainian immigration only dropped off at the onset of the First World War, which sadly led to Ukrainian immigrants being labeled as enemy aliens in Canada.  The unfair (and painfully ironic) persecution of Ukrainians in Canada ended in 1920, and fortunately didn’t do much to diminish the Ukrainian impact on Alberta’s cultural (and agricultural) landscape. Today, over 100 years later, Alberta is a treasure trove of Ukrainian influences – despite the fact that I have no Ukrainian heritage of my own, I grew up surrounded Ukrainian things.  I made pysanka (Ukrainian Easter eggs), watched Ukrainian dance, and ate a LOT of Ukrainian food.  I even learned Kendo (Japanese sword-fighting) in a Ukrainian cultural hall in Edmonton. How’s that for a bit of multicultural juxtaposition?

Oddly enough, one of the most visible reminders of Ukrainian culture in Alberta can be encountered in small towns and on roadsides in the form of some surprisingly monumental statues.  Alberta has a delightfully odd fondness for immortalizing unusual objects with huge statues, and a number of these statues proudly celebrate items of Ukrainian origin.  Vegreville, for example, boasts the world’s 2nd largest pysanka statue (it was the biggest in the world, but a larger one was built in the Ukraine in 2000, which… is fair, I guess). The town of Glendon proudly displays a giant perogy (that’s the preferred Albertan spelling, FYI), impaled on an equally giant fork.  And, most relevant to this recipe, there’s the town of Mundare and its enormous Ukrainian sausage link.  Indeed, Mundare’s Stawnichy sausage company has become virtually synonymous with kobasa in Alberta – hence the towering 12.8 meter (42 foot) reinforced fibreglass link.

You might be wondering why, given all this, I don’t call these kobasa and corn pancakes.  The answer is rather dryly pragmatic; my audience is broad and international, and the Polish word kielbasa is a much more commonly used term than the Ukrainian kovbasa, and certainly more common that the Albertan kobasa.  Plus, Polish heritage (and sausage) is pretty big in Canada too, and while I didn’t grow up surrounded by it, it’s still a big part of this country’s multicultural landscape.  Indeed, Poles and Ukrainians seem to have a mostly-friendly rivalry in Canada about what to call the many shared elements of their cuisine (and whose take on them is better).  I’m not here to pick sides; give me my perogies, cabbage rolls, and sausages, and don’t ask me how to spell them. These pancakes are my little love letter to Alberta for reasons beyond the simple inclusion of sausage though.  Albertans (and ex-pats like me) are very fond of their sweet corn – and in particular, the corn from the little Southern Alberta farming community of Taber.  Taber corn is an agricultural specialty, looked forward to each year by people from all across the province.  The area is uniquely located in a very sunny and warm (in the summer anyway) microclimate.  This causes the corn to grow big, sweet, and juicy, and as a result it’s become something of a prized commodity.  It’s so beloved in fact that some unscrupulous people have started capitalizing on it by selling out-of-region ‘counterfeit’ Taber corn at roadside stands.  Taber has started issuing certificates of authenticity to qualified growers and vendors in order to combat the problem.  In 2019 there was heartache (and extensive media coverage) as the crops were hammered by autumn hail.  Albertans take their corn seriously, folks.

Sausage and corn.  Already plenty to work with, but not the end of our prairies story.  Honestly, I didn’t even realize just how prairie-focused these pancakes were when I made them.  I guess it the prairies truly are cemented in my subconscious.  The wheat flour? Canadian, of course.  We grow a ton of wheat.  Actually we grow about 30 million tons of wheat per year, so I guess this is one of those rare cases where the term ‘a ton’ is actually a drastic under-exaggeration.  Heck, even the mustard I added as a punchy condiment is terribly Canadian; Dijon mustard might have originated in France, but almost all of it is made with Canadian mustard seeds.  Canada actually produces the majority of the world’s pure mustard seed, meaning that most prepared mustard condiments have Canadian origins (though Pakistan and India grow huge quantities of combined mustard/rapeseed crops primarily for mustard oil and meal).

Perhaps I’m feeling a little nostalgic.  This year is shaping up to be the first time in a long time that I haven’t been able to make it back to Alberta for a visit, and I find myself meditating a little on the food I grew up.  But whether you grew up with it or not, sweet corn, smoked sausage, and pancakes are foods that are simply made for each other.  Top things off with a bit of sour cream, some melted butter, and a little Dijon mustard, and you’ve got a meal fit for a king – or, perhaps more importantly, a very hungry prairie farming family. The basic batter for this recipe is quite easy to make, but if you’re looking for any tips, or if you need to troubleshoot a little bit, check out this main post in my savory pancake series.

This recipe calls for fully-cooked, smoked pork sausage.  This sausage is generally referred to by the Polish name kielbasa in North America, though (as I explained above) the variations on the Ukrainian kovbasa are also regionally common.  You might also see it (or something very similar to it) sold or referred to as Polish or Wiejska sausage.  You don’t need to use any one specific type of sausage in this recipe, and any cooked/smoked sausage will stand in nicely.

It’s worth noting that kielbasa (technically kiełbasa – the L with a stroke is pronounced like an English ‘w’) refers to any and all meat sausage in Poland, including uncured/uncooked varieties.  If you’re in an area with a large Polish population you’ll want to make sure that you’re buying kiełbasa Krakowska or kiełbasa wiejska.

This recipe really benefits from good, fresh sweet corn. If you’ve got access to good quality seasonal corn, I highly suggest using that. You can boil the corn to cook it (10 minutes or so is usually just right), but I’ve lately found that my preferred cooking method involves the microwave. Whole corn on the cob with the husk left on will cook in the microwave in about 4 minutes (aim for 3 if you’re uncertain or you have an overzealous microwave). This method is fast, simple, and ideal for cooking one or two cobs, making it perfect for a recipe like this.

No fresh corn? No worries – good frozen corn works beautifully, and only needs to be thawed out with a bit of running water before using. I wouldn’t use canned corn though – it’s generally not sweet enough, and lacks the fresher flavour of frozen.

You’re obviously going to change the character of a sausage and corn pancake by leaving out the sausage, but there are a couple of very nice vegetarian variations you can explore.

If you want to substitute for the sausage, I would try using a bit of smoked tofu. Smoked varieties are generally firm tofu, so they’ll add texture and flavour without making your pancakes watery. Crumble or chop the tofu up and add it to the pan just as you would for the sausage as detailed in the instructions below. You can even sear it in a pan (sliced or crumbled) with a little vegetable oil ahead of time.

You can also omit the sausage altogether and focus on the corn. You can try doubling the corn in the recipe, but make sure you don’t skip out on the onion step! You can just stop there and call it a day, but consider adding a little smoked paprika (about 1 tsp should do) to the batter to bring some of the savory/smoky flavour that you’d otherwise be missing without the sausage. Note: Nutritional Information is given for a single serving (1/6th portion of the total recipe), and includes extra corn and kielbasa to garnish.

GOOD NEWS:
You wouldn’t expect a pancake recipe to be high in protein yet low in carbohydrates, but here we are.
BAD NEWS:
These are a bit high in saturated fat, and a little low in vitamins.
TRIM IT DOWN:
Use low-fat Greek yogurt or sour cream and a bit less sausage to garnish if you want to bring the calorie and/or saturated fat content down a little bit. You can add a bit more fresh corn and mustard to punch up the flavour when serving, if you like. Sausage Type - This recipes calls for fully cooked Polish-style pork sausage, but any similar sausage will work nicely.  Ukrainian, German, Farmer's, Mennonite, and other firm or smoked sausages will all work nicely. Extra butter - I use a well-seasoned griddle to make my pancakes and I've never needed any extra butter to keep the pancakes from sticking.  That being said, if you're using a skillet or frying pan, you may want to have a little extra butter handy to add to the pan in order to keep the batter from sticking as it cooks.

See The Other Variations 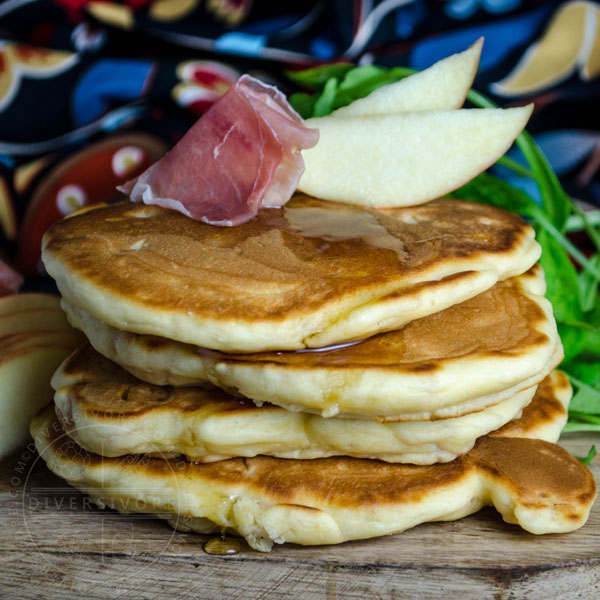