Definitely not! The young fruit of the almond tree is edible in its entirety.  While it is true that the bitter almond (sometimes called Prunus amygdalus) produces considerable quantities of cyanide in the mature seeds, these types of almonds are not harvested for use as green almonds.

All almonds produce some amount of cyanide through the hydrolysis of the compound amygdalin, but the amount found in sweet almonds (including green almonds) is extremely small and presents no danger to humans.  Green almonds are likely to have even less amygdalin present, as the kernels have not yet developed fully.

How do you eat green almonds?

These small, mild, sour little fruits are most commonly served raw with sea salt, or pickled.  Their brightness, crunchy textures, and pleasing acidity make them excellent additions to cheese plates, mezze, and charcuterie boards.  They're also lovely (cooked or raw) in salads, pastas, and stews (e.g. the Persian favourite Khoresh Chagal'eh Badoom).  The whole almond is edible, including the soft fuzz on the surface.

Name - In English these are almost exclusively referred to as green almonds, though you may occasionally encounter the term 'young almond.'  Names in other languages tend to be similarly descriptive.  The Farsi (Persian/Iranian) name چغاله بادام (read from right to left) is transliterated a variety of ways - the first word (چغاله) is most often Romanized as chaghale, chaghaleh, or chaghal'eh.  The second word (بادام), which means almond, is generally Romanized as badoom, but also badum, or badam.

Use/Cooking - Green almonds are a little bit unusual, in that they're a fruit that's treated somewhat like a vegetable, generally eaten raw, but equally easy to cook.  The crisp texture of the almonds isn't diminished by pickling, and only softens somewhat from cooking.  The relatively mild taste of green almonds also lends itself well to sweet flavours and desserts.  While they're unlikely to anchor a meal (or dessert) on their own, they make a welcome addition to a wide variety of dishes.

The inner kernel of green almonds can be removed and used on its own, separate from the green-tasting shell.  These delicate, mildly sweet nuts have a jelly-like consistency, and can be used in desserts, as well as salads and other light dishes.

Store - Green almonds keep fairly well in the refrigerator, though it does depend somewhat on how fresh they were when they went in.  Fresher almonds will keep for at least a week, and up to about three weeks.  They will start to harden and become a bit more bitter as time passes, though the tolerability of this varies depending on personal tastes, almond variety, and overall freshness.  You can keep an eye on them simply by tasting one from time to time.  As long as they're still fairly soft and lacking any bitterness, they're good to go.  If you do find that they've started to become bitter, you can use a sharp paring knife to peel away the green outer flesh and expose the tender young almond kernels at the center.  These should still be delicate and delicious.

The outer skin (actually the immature shell) of green almonds is relatively soft, and can be knicked or gouged if handled roughly.  Green almonds will store for a very long time if brined or lightly pickled.  See below for notes and a pickling recipe.

I've encountered a number of online sources that more-or-less equate green and mature/raw almonds in terms of nutrition, but this is absolutely not the case.  Green almonds differ markedly from mature ones for two key reason: 1) the outer 'shell' (which is of course, still green and tender) is eaten, and 2) the kernel has not yet matured, meaning it has not produced the same quantities of fats, carbohydrates, and proteins that will be found later on.

The nutritional data presented above is taken from the mean green almond nutritional data from a 2018 study* of 10 commercially important almond cultivars (varieties).  The study did not compare dietary fiber or vitamin content between green and mature almonds, and as such, I have not been able to present that data here.

I believe it is fairly safe to assume that green almonds contain high levels of dietary fiber, and moderately high levels of Calcium and Iron, as these are present at high levels in mature almonds.  Should more specific and accurate data be made available, I will update the nutritional information given here.

*Summo, C., et al. (2018) Evaluation of the chemical and nutritional characteristics of almonds (Prunus dulcis (Mill). D.A. Webb) as influenced by harvest time and cultivar. Journal of the Science of Food and Agriculture 2018, 98: 5647-5655

As of 2020, there are no genetically modifed or gene-edited almond varieties in the food supply.  Almonds have begun to attract some attention from breeders interested in gene-editing, as conventional breeding methods are time-intensive and frequently subject to issues related to quality and disease management, but this has not yet translated to any changes in the actual food supply or commercial almond operation.

A 2014 lawsuit* in California gained minor notoriety when Whole Foods Market was sued for selling Blue Diamond brand almond milk with the Non-GMO Project verified label before product verification had actually been completed.  It is worth noting that the issue at hand in the lawsuit is related to labeling, transparency, and fairness in marketing, and not one related to any potential for contamination by GM products; there are no genetically modified almonds in the food supply, so (with or without any outside verification), it is impossible for the product sold by Whole Foods Market and Blue Diamond to have contained any genetically modified almonds.  The case was dismissed in 2015.

*Michelle Richard v. Whole Foods Market California Inc., Case No. BC563304, in the Superior Court of the State of California, County of Los Angeles.

Green almonds are an undeniably healthy choice, though care should be taken to avoid comparing them directly with mature almonds from a nutritional perspective (see Nutrition Note above).

Sweet almonds (the type of almond that's almost exclusively consumed today) exist thanks to a mutation that prevents the production of hydrogen cyanide from the breakdown of the compound amygdalin.  Sweet almonds (and by extension green almonds) still produce amygdalin in their kernels, though in FAR lower amounts than bitter almonds.  Even so-called semi-bitter almond varieties produce significantly less amygdalin than true bitter types.  As such, the amount of cyanide produced by sweet almonds is minute, and can be expected to have no impact on human health.

Amygdalin has been marketed as a purported cancer cure, both under this name, and under the name 'laetrile' (a patented semi-synthetic version).  There is no evidence to support its efficacy in treating cancer, and considerably more concern over the possibility of cyanide poisoning and toxicity related to its use.  Green almonds, as the immature fruit of various sweet almond varieties, contain vanishingly small quantities of amygdalin.

California produces approximately 1 billion kg (over 2 billion lbs) of almonds annually, representing the majority of US production, and nearly a third of the global total.  Persistent drought in California, coupled with the size of this crop and the high water demands of almond trees, has raised significant concerns over the sustainability of almond production in the state.  The almond crop also places huge demands on commercial honeybee operations in the USA, with more than half of the country's commercial bees being trucked into the region for the late winter/early spring flowering period.

These issues surrounding sustainability have come to the forefront in California almond production in recent years.  As of 2021, a number of initiatives and possibilities are being investigated by almond growers, governmental organizations, and environmental advocacy groups.  Debate over the best course of action is ongoing, and issues over water use continue to be particularly contested. 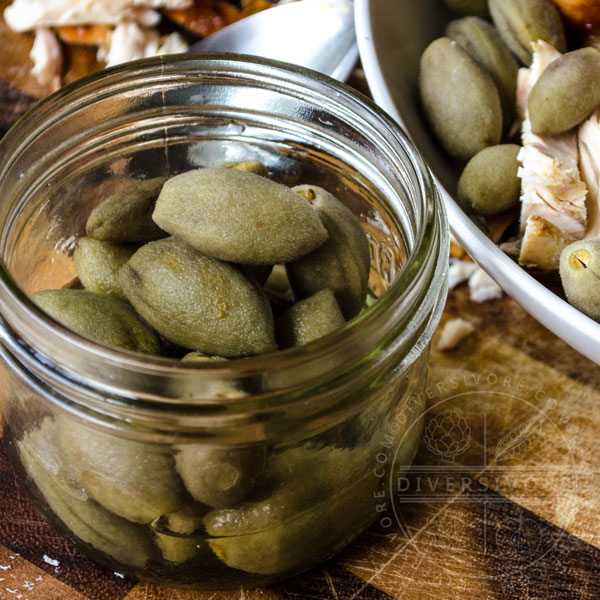