Hanami in the
Time of Solitude

Sakura – Japanese cherry blossoms – have played an outsized role in my life. Now, in early 2020, with the world feeling very different and with many of us looking to the people in our lives with greater significance, I wanted to share with my cherry blossom story with you in words, images, and video.

Japanese cherry blossoms have held an unusually prominent position of significance in my life. The short-lived mass blooming of ornamental cherry trees in early spring is stunningly beautiful of course, but beauty alone isn’t really enough to make something resonate on a deep and personal level.  When I first moved to Vancouver I was pleasantly surprised by the diverse multitudes of spring-flowering trees – especially since I’d spent most of my life in rather chillier parts of Canada before that.  I quickly began to look forward to the spring displays, but it wasn’t until eight years ago that an amazing and entirely unexpected coincidence caused cherry blossoms to become considerably more significant in my life. It was spring of 2012, and my wife and I were wandering around Vancouver’s Van Dusen Botanical Gardens at the annual Cherry Blossom Festival, enjoying a beautiful spring day, and trying to get our heads on straight.  Our first son had been born only three months earlier and, in our rather frazzled and exhausted states, we hadn’t exactly been getting out and about much.  In fact, thanks to our son’s vocal hatred for his car seat, my frantic work schedule, and the general exhaustion of being new parents, we’d barely had any leisure time at all.  It’s fair to say that we were really just hoping for a peaceful day out – ideally without much angry crying or nap disruption.  Come to think of it, two more kids and eight years later, I’d say that the bar is still more-or-less in the same spot. But that day – a day we barely managed to drag our exhausted selves out of the house and across town – quickly turned into a day I’ll remember for the rest of my life.

I feel like the English language is missing a word in between friend and acquaintance.  We use terms like ‘work friend’ or ‘school friend’ to describe the people we like, but who occupy only the transient, liminal places and times in our lives.  Circumstances often keep us from growing closer to these people, but we still consider them our friends.  Despite this, we know that these people could disappear from our lives at any moment – or that we might disappear from theirs. Calling these people acquaintances feels wrong, and yet we judge ourselves for calling them friends, as if the word carries some universal connotation of commitment or permanence.  Rob and Eri were my ‘kendo friends.’  We’d first met while practicing kendo (Japanese sword fighting) in Edmonton, Alberta.  Rob, like me, had joined the club early on because of an interest in the sport.  Eri had moved from Japan to Canada, and wanted to practice a sport she’d first learned back home.  Much to the delight of everyone in the club, they met, fell in love, and got married.  I’d always had fun and gotten along with them both, but I never saw them outside of kendo.  My time with the kendo club stretched across two university degree programs, and I can’t say that I spent a lot of time cultivating longer lasting friendships during that busy time. I wish I had. Hindsight, and all that.  Then one day, Rob and Eri announced that they were going to move to Japan together. We were all delighted, though our tight-knit little club was sad to see them go.  We held ‘sayonara practices’ for them (a wonderful, albeit grueling kendo tradition that involves sparring with every single member of the club in rapid succession, capped off with a final bout with the sensei).  After her practice, Eri gave me a string of handmade paper cranes that I still have.  Rob and I went for lunch at the little Vietnamese restaurant next door after his practice. I was sad to see them go, but happy that they had each other, and new adventures to look forward to.  I figured I’d likely never see either of them again. Then, out of nowhere, many years later and in a completely different city, Eri came up and tapped me on the shoulder at the sakura festival.  She’d spotted the back of my Edmonton Kendo Club jacket in the crowd.  She and Rob had moved back to Canada, and they had a son a little older than ours.  Now, thanks to a sakura festival and a jacket, we were all together again.  We all got to talking and catching up, and quickly realized that we lived only a few kilometers apart.

I’m delighted to say that we’re fully-fledged friends now, and not just kendo friends. In what I think is a fairly universal trend, our get-togethers tend to be less focused on festivals and events and more focused on sharing food these days. Nonetheless, sakura have only continued to grow in significance in my life over the last couple of years; in early 2018 I met the film crew from the Japanese TV series ‘Who Wants to Come to Japan?’ at the very same Vancouver Sakura Festival. I cooked a meal for them, told them of my love for ponzu shoyu and Japanese citrus, and ended up being invited to participate in a life-changing culinary trip to Japan.

The cherry blossoms have been good to me. I’m very lucky to have beautiful cherry trees right in front of my yard, and many more in the city I call home. Sadly, the global state of affairs in early 2020 has meant that I, like many people, haven’t been able to enjoy the hanami (flower viewing) festivities with friends and family this year.  Hanami, for the uninitiated, is the activity of heading out in groups to enjoy the short-lived splendour of blooming sakura trees.  The activity is generally paired with good food and drink, as all good activities are.  Hanami is a very, VERY big deal in Japan; millions of people head out annually to public parks and along the sakura-lined streets during both daytime and nighttime events (nighttime hanami has a separate name – yozakura, literally ‘night sakura’).  The Japanese Meteorological Agency even forecasts the blooming of sakura across the country – the so-called Cherry Blossom Front.  This is no small feat mind you, as Japan’s sakura season tends to stretch from mid-March in southern Kyushu all the way to mid-May in northern Hokkaido, with substantial variation in between due to the complexities of climate and geography.  But the social restrictions and isolation brought on by the Covid-19 global pandemic have put a substantial damper on hanami in Japan, and elsewhere in the world. While public parks in Japan were able to stay open during the 2020 sakura season, most coordinated public events were cancelled. Washington D.C., which welcomes nearly a quarter of a million visitors to it’s National Cherry Blossom Festival each year, had to cancel most of its festivities. In Wuhan – epicenter of the Covid-19 outbreak – driverless vehicles filmed the cherry tree lined streets at Wuhan university, broadcasting the images into the homes of quarantined residents.  Other major annual sakura festivals were cancelled or scaled back, including here in Vancouver, where all of the public festivities were cancelled, or moved online.

The flowers went right on blooming of course, oblivious to our troubles. I’m not going to try and put a positive spin on all this, but I couldn’t help but be struck by the strange, bittersweet poetry of it all.  Hanami, and sakura in general, have long been associated with the Japanese concept called mono-no aware (物の哀れ), a concept that wistfully acknowledges the beautiful impermanence of life.  We watch the cherry blossoms as they erupt into glorious display, knowing that in just a week or two they will have disappeared.  They will return of course, and we will enjoy them again – but for how long? How many days of hanami do any of us get to experience? How many cherry blossoms will bloom and fall before our own time is done? Mono-no-aware is felt whenever we are party to the exuberant, joyful displays of life and nature, all the while knowing that it cannot last.

With circumstances necessitating that we admire the blossoming cherry trees in solitude, the melancholy of mono-no-aware hit particularly hard this year.  Because of all this, and because I was fortunate enough to be able to, I decided to make two things to share with you all.  The first is a recipe, which I hope will help you to hang on to the ephemeral joy of sakura just a little longer.  The second, a video and song shared below, will let you experience a quiet little hanami of your own, if only for a few minutes. I hope you’ll share it with the friends and family you’d have wanted to have there with you, beneath the flowers of the cherry tree.

As much as I’d love to be able to sit beneath the cherry blossoms with friends and family on any given day, the sakura season is short-lived, and sometimes life doesn’t allow us the luxury of companionship. I created this video to share with you all during April of 2020, as much of the world was stuck indoors trying to curb the spread of Covid-19. While video can’t quite compare to the real thing, I do hope that this will bring a bit of joy into your lives.

The music, for those interested, is the traditional Japanese folk song “Sakura, Sakura”, played on the ukulele by me.

This post originally started out as a long intro to a recipe, but the two components felt like they warranted separation into distinct posts (especially with the video in the middle).  I’ve put together a recipe for preserving cherry blossoms here, and I hope you’ll check it out.  The beautiful flowers (and the pink, almond-scented vinegar that’s a byproduct) is wonderful to cook with, and a lovely addition to sweet and savoury dishes.  In fact, I’ve got a recipe for some sakura cookies coming to the site very soon. 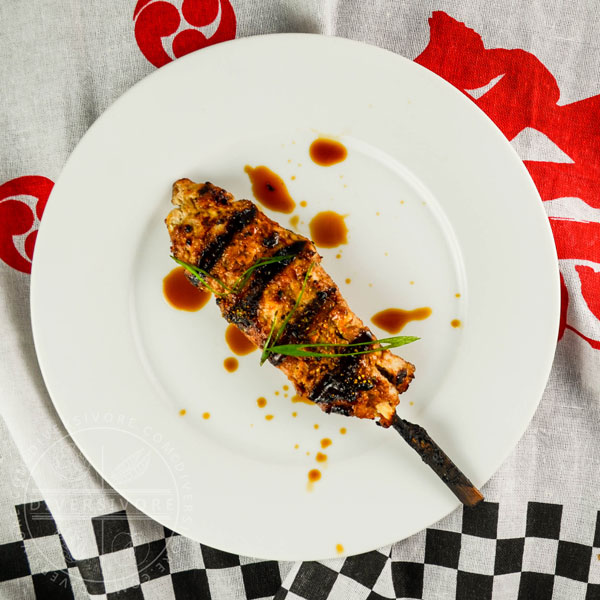